Aranos has been proclaimed on the 15th of January 1958 as a Village, according to Ordinance no.16 of 1937.  On 01 September 2010, Aranos was proclaimed a town by the Minister of Regional and Local Government and Rural Development via Government Gazette No. 4556. The current council consists of seven (7) elected  members which include a mayor, deputy mayor, a management committee and ordinary members. The staff structure consists of the Chief Executive Officer, who is the head of administration and two department heads for finance, administration and HR and one for Technical Services and Engineering. The newly staff structure makes provision for 39 positions although only 18 positions are currently filled.

It is part of Mariental Rural District. Aranos covers an area of approximately 38 000 square kilometers. The district is bordered in the North by Omaheke Region, in the South by Gochas, in the West by Mariental district and in the East by Botswana.

Symbolize that all Aranos inhabitants have to Unite after hard times of suffering and stand together and reconcile with those who caused Diversity.

Resistance of natural habitat of the Kalahari dessert.

It give also shade, and food and beauty to the flora and fauna of  Aranos

It further symbolize that desserts are hard to survive on, but the people have adapted to survive under tough conditions.

Resemble the toughness of Aranos people during bitter days of Apartheid, Racism and Discrimination before independence.

After  hard times independence came as a healing for  the sufferings for Aranos people so as the “ALOE” also used for medical purposes. 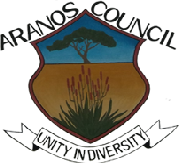